The goal of the Copenhagen Wheel project is to create a smart, responsive and elegant solution for urban mobility. It instantly transforms ordinary bicycles into hybrid e-bikes that also function as mobile sensing units. It captures the energy dissipated while cycling and braking and save it for when you need a bit of a boost. It also connect your bike to a larger community through smartphone to map pollution levels, traffic congestion, and road conditions in real-time.

I was recruited to visualize the data collected into interactive graphics. In the first review I set myself 3 goals: i) visual impact; ii) insightful interpretation; iii) easy for both public understanding and decision making.

Embedding sensors in bicycle wheels has obvious advantages that make the visualization interesting, such as mobility and realtime networking. However in current phase of the project, we had no prototypes finished, and could only expect around 15 sensors sent out before the final presentation. That data is too sparse on a city of 4 square km. Moreover, since we have loose control of where the riders go, it is almost impossible to get a filled map at a random time spot.

My first solution was what I called ‘merged time’: users saw data from different time on a merged map, but could also tell which are old and which are new. Data left a fading trace after them. Here is the first demonstration video I made for the concept:

As we were still figuring out the UI elements and color treatments, data started flowing in from the pilot program. I started testing my visualizations agains real data:

NOx accumulative in one single day: 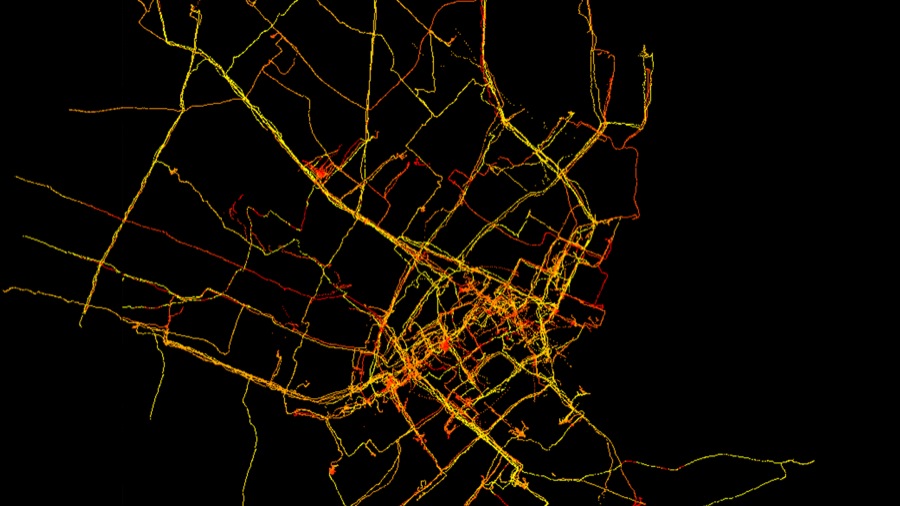 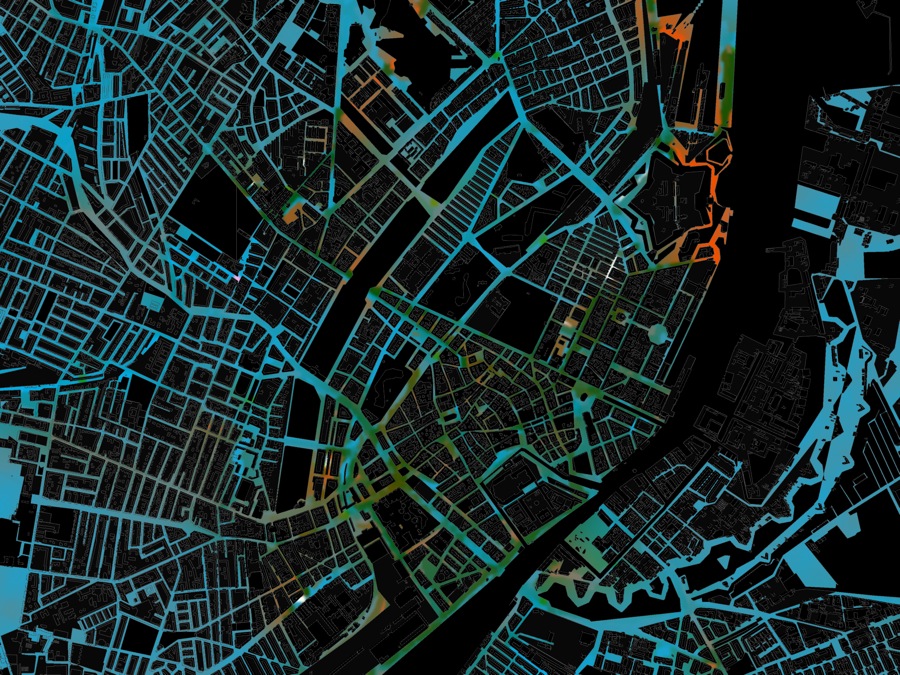 Presentation of the Copenhagen Wheel project at UN Climate Summit for Mayors in December was a huge success.

The idea was that pollutant information collected by the sensors embedded in wheels were transmitted to our server through smart phones. A web interface, accessible with both pc and phones, showed pollutant distribution in real time. One could browse his own data, keep a record of his contribution to a greener city, challenge with friends, and get route suggestions according to pollution level. The city management could keep an eye on the city and react to dangerous level of pollutants right away. The complete and high-definition record of pollutant maps could also cross-reference with land use, weather, transportation etc. in urban research and in long term, support policy decisions. Screencast from the presented online user interface):