Xbox One Multitasking I

Moving from 360 to One, Xbox introduced a new feature called snap - a way to run a companion app side by side with a game. It was designed to be the primary multitasking model of the console. System functionalities such as gamer cards, party, messages and help are automatically snapped during a game.

Snap Had A Problem

There were many confusion and complaints around the feature from the beginning. A large percentage of users did not understand what snap/unsnap meant. When something was automatically snapped, it captured their focus, and they couldn’t figure out how to move the focus back to the game or get rid of the snapped app. For power users, the easiest way to switch focus and manage snap was using speech commands (Xbox unsnap, Xbox switch). Since Kinect was unbundled from the box, the only way for non-speech users to manage snap was to leave their games and go home.

I started tackling the problem as soon as the initial release. The goals included:

There was a system shortcut - double tap the Xbox button - assigned to switching focus between the snap app and the fill app. I built my explorations on augmenting this legacy interaction.

I wrote several quick and dirty prototypes to test the models, both internally and in usability labs. Feedback from each prototype inspired the next iteration. We were testing a few new every week, and sometimes tweak things on the fly in meetings:

An early iteration was the Pull Up model: a system chrome is hidden on the top edge of the snapped app. A visible cue is introduced to teach about the menu and retain the knowledge. It preserves the behavior of double tap to fast switch focus, and let the user remain in the context. Cons included that some apps may have to be redesigned to not trap the upward navigation; and that the menu would be difficult to access from the bottom of long scroll list. 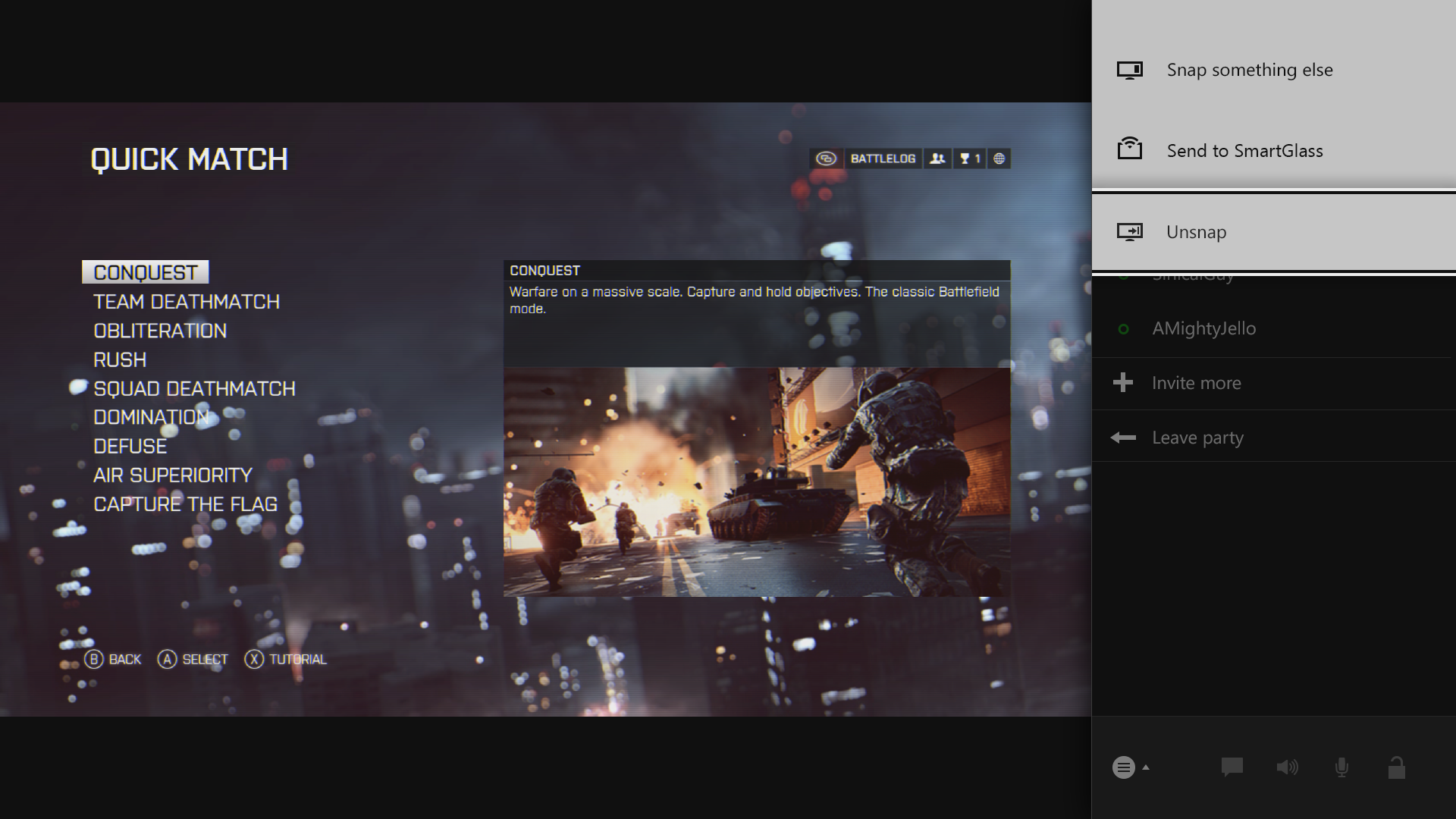 Another model was called the Pull Back model. It looked similar to the multitasking list on mobile systems, with menus next to each running app. It did not constrain app design, and was scalable for future expansion. However, the scaling animation was a challenge to system performance.

When users were trying this model, they pointed out that the animation made the switching feel slow. They also did not like that the once fast double-tap interaction is now double-tap, left/right then A. I realized that an A press was excessive in this case. If the default focus is always in between the two apps, the user could simply push left/right to indicate their intention: 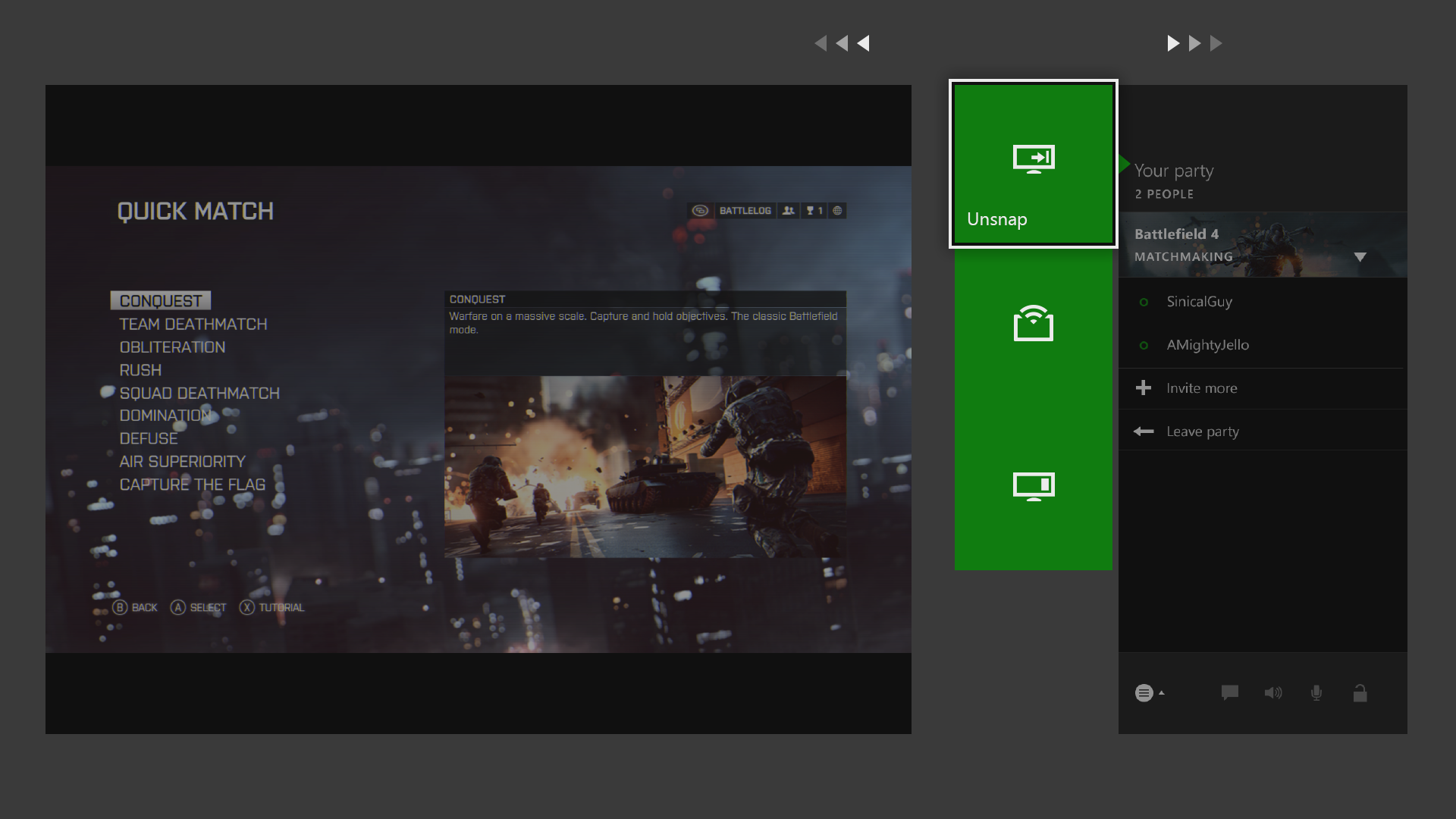 I found that after using this tap-tap-push a while, muscle memory really kicked in, and we didn’t even need to wait for the UI to animate in. Doing it fast really felt performant and empowering. I extended this model to what was called Tap Tap Plus - after double-tapping, all four directions are assigned to some multitasking action. The symmetrical UI was simple and self-revealing. 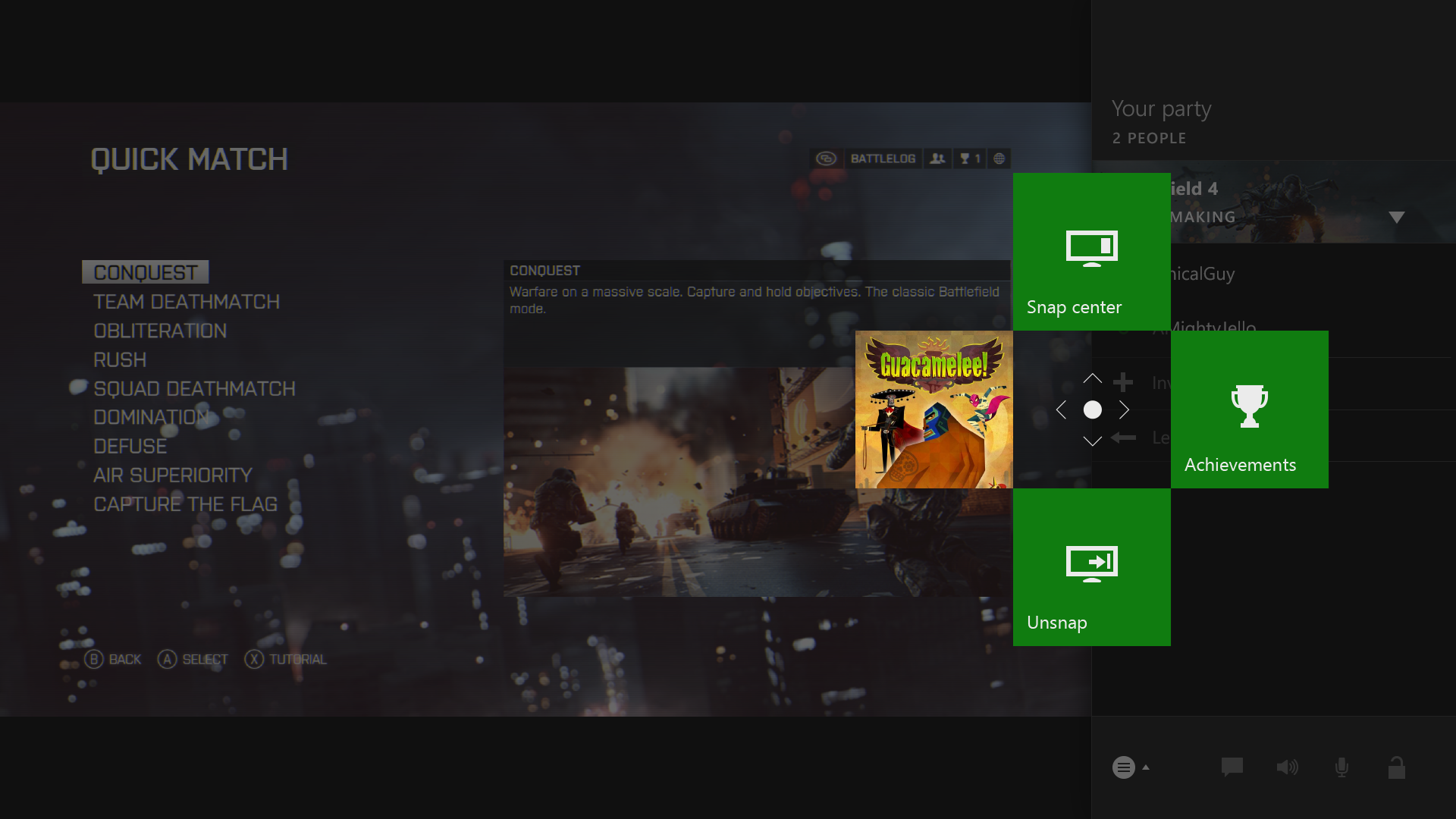 We added the shortcut tap-tap-X for recording game clips, another system functionality that was only available through speech before. For tap-tap-up, we designed a new destination called the Snap Center, which allows the user to snap an app from within game, or just check stats without launching them: 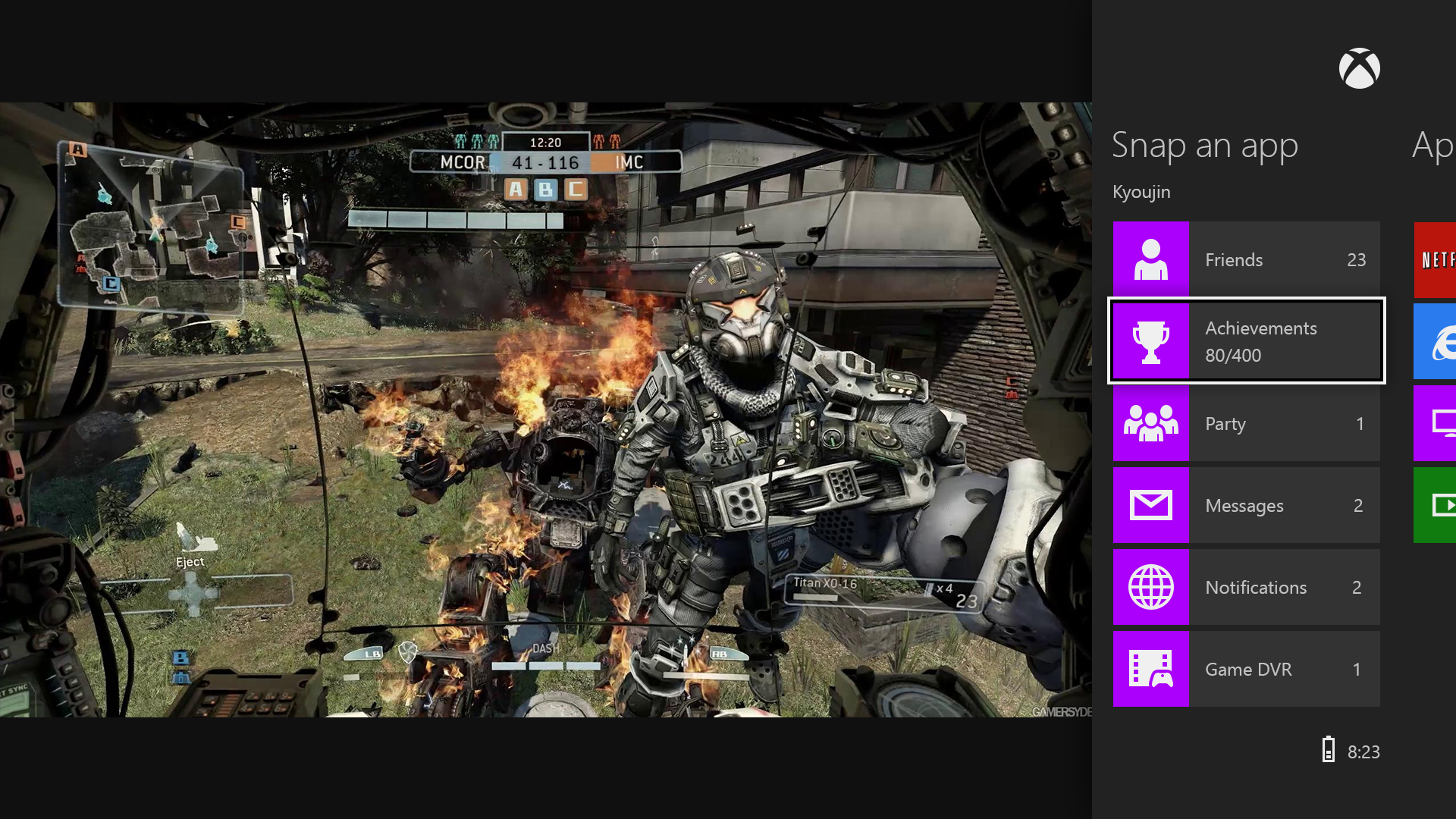 The feedback in user labs were overwhelmingly favoring this model. Quotes: “That’s really easy to do. That makes the whole experience easier by 100 percent. I can’t even put it into words. I’m going to use that feature today and everyday I think.” Another user: “This (double-tap) changes my outlook on snap. I think I would use the snap bar more. It’s a nice touch.”

The new snap experience rolled out as part of the October update. It was the first high-profile feature I shipped as a designer, and the experience was thrilling. I stayed up all night reading discussions on the Internet.

The feature was loved by the community. From one comment on Reddit: “I was never interested in snap before but snap center makes it much easier to use. I fund myself taking long videos and having conversations with friends while gaming and I never thought that would be something I would do.”

Only one month after launch, the double-tap chrome was already accounting for the same number of Snap Center activation as the snap tile in home, indicating big success in user adoption. It was used even more substantially for window management. Switching focus between fill and snap accounted for almost 50% of the chrome’s usage, and snapping/unsnapping accounted for another 28%. Hundreds of thousands of game clips are recorded every single day using double-tap X.