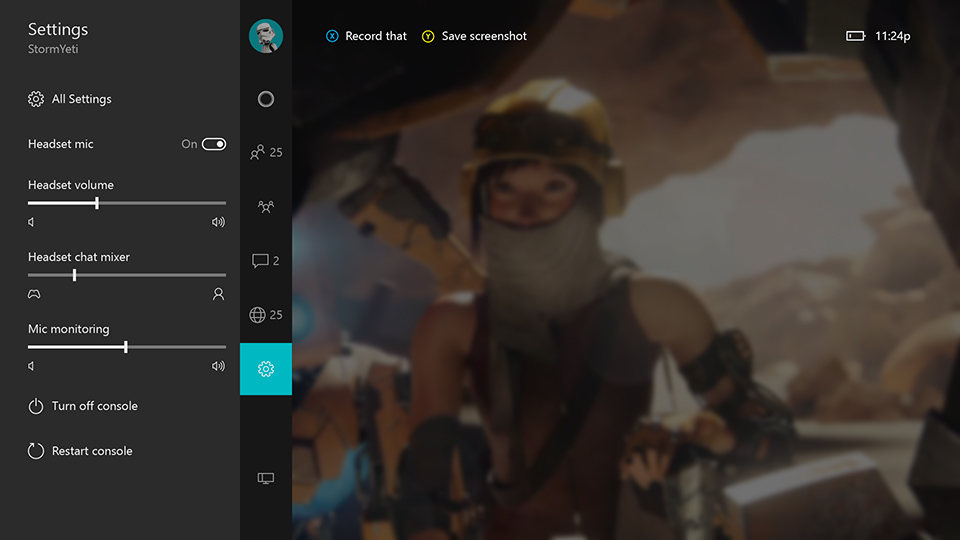 Is Snap Ready To Die?

Although the snap chrome made snap easier, the grander problem of snap remained unsolved. What Xbox marketed as a next-gen multitasking experience was facing serious problems:

Less than a year since Xbox One was launched, the overwhelming user feedback had prompted the team to ask the question seriously: can we kill snap already?

The team started by auditing every scenario where snap was involved. It quickly became clear to us that the very long list on the white board fell into two buckets:

We acknowledged that snap provided a valuable surface for persistent scenarios. However, for transient tasks, it was a much bigger hammer than was needed for the job. The visuals were heavy, and performance was affected by apps sharing resource with the game.

Using telemetry data, we identified the top 5 transient apps: Friends, Achievements, Party, Messages and Game DVR. With quick settings, they formed the Big Six. My goal was to provide a better experience for these tasks: boost performance; allowing quick access; use screen real estate more effectively and improve ease of use.

The proposal that required the least amount of dev work was to consolidate the Big 6 into one app. They would be able to share API calls, and the app will be kept hot as long as possible. Unfortunately, it was still depending on snap, which was a heavy solution with hidden interactions (double-tap).

To address the screen real estate issue, I introduced a concept called Form Follows Focus - when focus is in the snapped app, it looks exactly the same; when focus is moved away, it transforms into a less intrusive overlay which provides ambient information. It would uses only what is necessary depending on the user’s intention.

I built a prototype in WPF and tested this interaction internally. Some of the picture-in-picture scenarios sprung from this one was really compelling. Challenges included the visual transition between snap and overlay; extra UI for developers to support; the increased reliance on the double-tap chrome made multitasking even more complex for novice users.

To remove the double-tap obstacle, I came up with the idea of merging multitasking and the dashboard. Maybe the user never moves focus into a split-screen UI. They only interact with the snapped app when they press the Xenon button and go home, where the app UI is docked to the left of the resume tile: 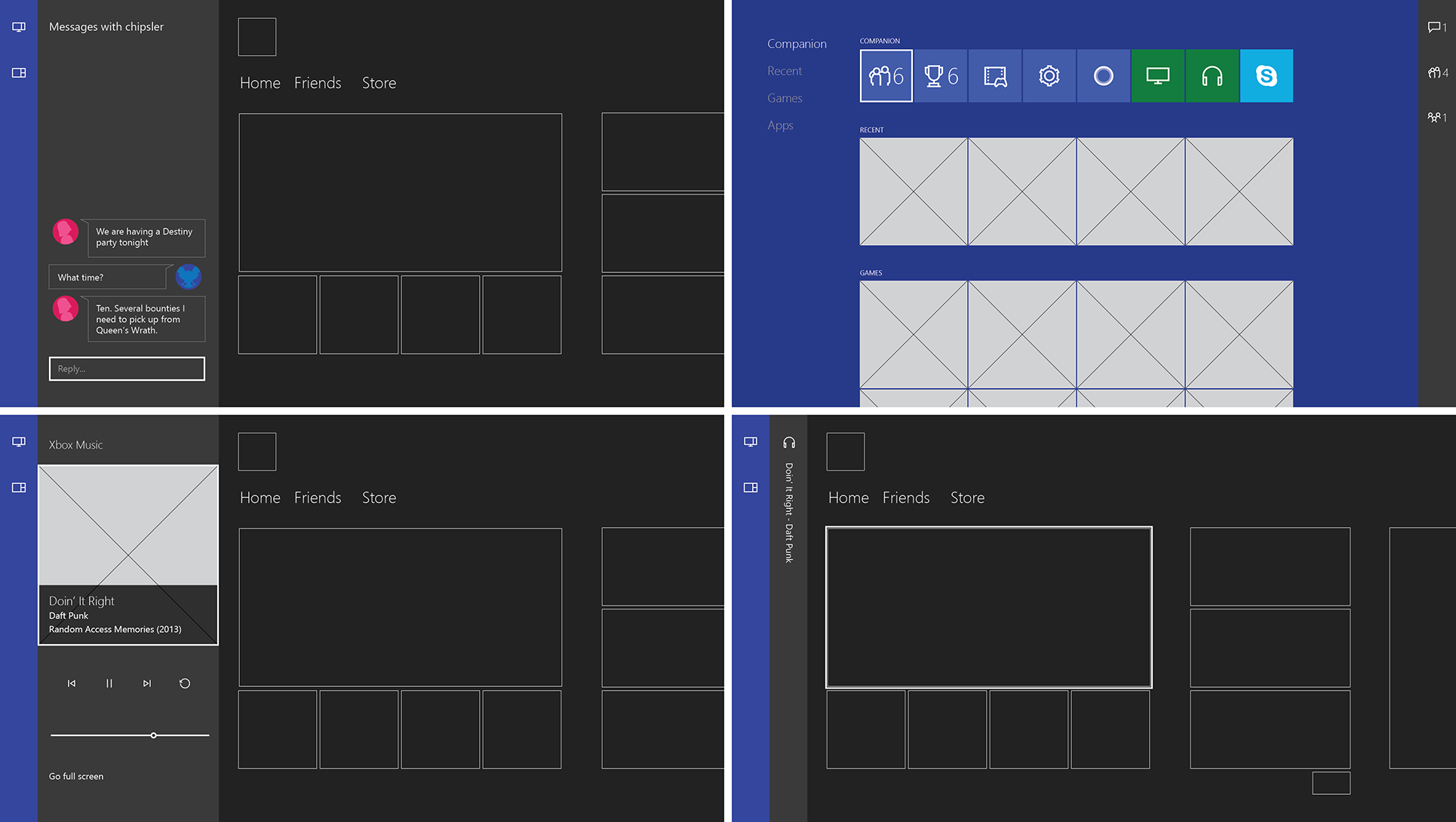 I really liked the simplicity and cleanness of it. It would be one button press to do anything besides the primary activity. There would be no hidden interactions, no window management. The system architecture would need to be rewritten, but we could at least recycle the design of the current Snap apps.

For the user to quickly switch between top transient experiences, I made two tweaks: a “most recently used” bar next to the app UI; and for pro-users, the ability to bring it in over the game by doing the good old double-tap:

At this point the proposal had been referred to as the Sidebar. Our engineering partners were not sure if the huge dev investment would be worth it. I built a prototype to both convince them and verify the interaction design myself. At the time, the system technically couldn’t host a third-party app in home, so the compromise was made to build special versions of the big 6 and keep the current snap model for the others. Two main factors went into deciding the visual structure of the sidebar:

The Sidebar model got overwhelming support internally, so we sent my prototype into the lab. Participants didn’t have a problem discovering the sidebar or finding content within. Some participants still had trouble understanding snap management, but that frustration was reduced by moving essential Xbox Live functionality out of snap. The teaching tip was not effective, many just ignored it; we iterated on the design based on this feedback. Overall, participants were super positive about it. They viewed it as simplified and streamlined access to system features.

The adoption of the sidebar shifted the focus of the entire design team. The Xbox Home was restructured around it. I followed through the execution by defining its design guideline for each feature team. Most of the desired specs was realized, except some snap behaviors that was dropped last-minute due to resource considerations.

The sidebar was eventually branded as the 360 Guide re-imagined for Xbox One. The Guide became the iconic piece of NXOE (New Xbox One Experience) at E3 2015. The announcement received many passionate responses from the users.